All Collections
Cost basis / calculations
Why do I have gains on stablecoins?

Why do I have gains on stablecoins?

P
Written by Petur
Updated over a week ago

We have listed some of the common scenarios below and how/if to fix them.

Small amounts of profit or loss

This is common if you are dealing with USD-based stablecoins but are using a different base currency yourself, such as EUR or GBP.
Since stablecoins are treated the same as any other crypto, the initial value of the coins might be different from the proceeds when you finally dispose of the coins. This is most noticeable when you have been holding stablecoins for a long period but is mainly due to exchange rate fluctuations, which can be over 10% per year.

Example below: The same 1000 USDT sold 4 months later creates a gain, as the rate USD-EUR changed:

Note that wash-sale rules, such as those used in Canada and the UK, can have an impact on these transactions and essentially cause multiple small profits/losses to build up and then be realized in a big chunk once you finally stop re-acquiring the stablecoin within the wash-sale period.

If you are using USD as your base currency, then you will mostly see small amounts of losses being realized when you spend your stablecoins. This is usually due to the fees that you paid when acquiring the coins since those fees can mean that your cost-basis ends up being slightly higher than your eventual proceeds.

Example below: Selling stablecoins at a small loss, due to a previously paid fee which increased the cost basis of the assets: 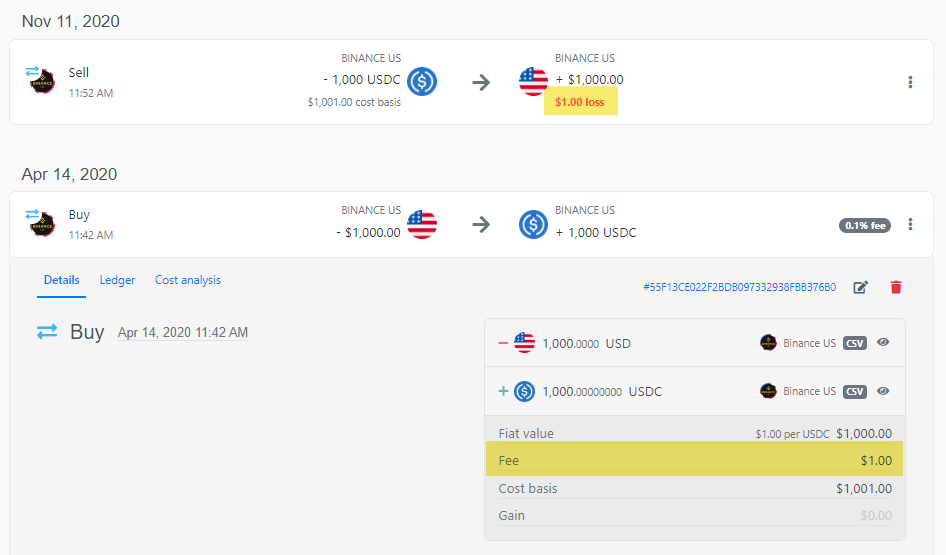 These errors can result in a large amount of profit being realized and should preferably be fixed.
This happens when Koinly has no record of how you acquired these coins or how much you paid for them. Even though the cost-basis of stablecoins will usually be $1 per coin, Koinly can not simply assume that this is the case as it would not be compliant (there are cases where the cost-basis is lower or the coins were acquired as income or realized profit).

Example below: Because 1869,27 USDT is unaccounted for, buying ETH creates an implausible gain:

This is probably the least common reason for gains on stablecoins. This happens when you have received the coins through a non-taxable event such as a Swap.
There are 3 types of non-taxable events that can lower your stablecoin cost-basis:

Did this answer your question?